For the year I went fishing 50 times catching 497 fish, which gives me an average of 9.94 fish per outing. This is a big decrease in the number of fishing trips compared to recent years, but an almost identical fish per trip average. This year I played more golf, shot more skeet and played in more softball games than previous years all of which made for fewer fishing trips on the year. I had a couple of really nice bass and really nice trout this year. We also had a long tough winter that made for a slow start to the 2013 fishing season. I did really enjoy the time I went but as always I wish I had gotten to go more and see some new and different places.
I went hunting 12 time in 2013 killing 18 squirrels, 6 rabbits, a turkey and a deer. Overall I felt like squirrel hunting was tougher than I had seen in many years, could be due in part because of our long winter conditions from 2012 into 2013 or possible bad mass . As for turkey season I went once and killed a fall turkey. I only deer hunted 2 days. I killed a deer the first and passed on multiple deer on the other day I went.
I hope to start predator hunting and musky fishing some in 2014. I also want to fish some new places. Take my girls to fish a few different ponds in the coming year, see some  sections of both the New and Potomac rivers that I have yet to see and I have a spring bass trip planned to Alabama for April that I have high hopes for. Possibly focus less on productivity and more on exploring some new outdoor places and the overall adventure factor that makes nature so interesting.

Charlie, JW and I hunted with Queenie, Sampson, and the pup Duke from 8am to 12pm. We jumped 8 rabbits. I killed three and missed one more, Charlie missed one, and JW missed one. We learned that Duke is gun shy. The morning started off with a heavy frost that slowed our hunt. I found a dead spike in the middle of a thicket. The poor deer hadn't been dead more than a day, but I could not determine what killed him. He was fat, had not blood in the frost around him, and had no visible bullet wounds. He was too far from the road to have been hit by a car. He really didn't look like he had been hit by a virus. I don't know, maybe a gut shot and maybe the wound from a small caliber closed around the bullet. 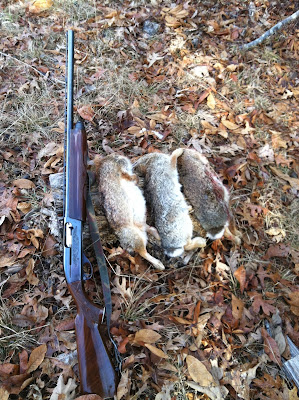 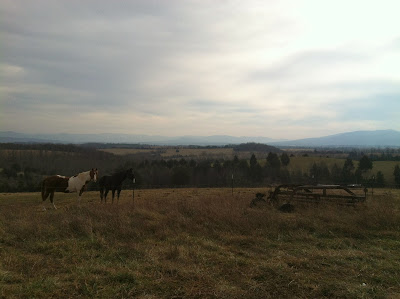 Garrick, Jasper, and I hunted morning on Jordan Run and here hunting the ridges of Maysville behind Garrick's new house. We saw 2 coyotes (no shots), a coon (it got shot), over 75 does (no shots taken), a six point (got a pass as well) and a spike that was too pitiful to shoot. We had a good hunt. We saw a lot of deer and had a good time.
Posted by MAD APOTHECARY

On a cold snowy 18 degree morning Roger and I started our hunt at daylight. The snow had frozen over and made travel a very noisy process. I got to my stand right on the far end at daylight. I saw 8 gobblers going up the hill together as a group, which is kinda neat on Thanksgiving day. At 8:30 I heard something behind me and turned around to see a cowhorn spike sneaking across the ridge to a thicket. I turned and picked a hole about 10 yards in front of him. A he stepped into the hole I squeezed the trigger of my Ruger M77. The gun went of and the spike went down then got back up and ran toward the Maddam's Creek side. I put the cross hairs on him a second time and pulled the trigger hitting him a second time after which he didn't get back up.
Roger killed a five point that morning and saw a huge bear track in the snow that looked very fresh. Years ago no one ever saw or heard the tail of a bear in Summers County and now people are killing them all over the place and seeing them very regularly. For such a cold morning it was nice to get a deer for some meat and go home in time to eat and early Thanksgiving Day dinner.

Sadly the forces that be conspired against me and I had to work the first three day of rifle season, however my Dad killed this quality Summers County 8 point chasing does in the woods around 10am. 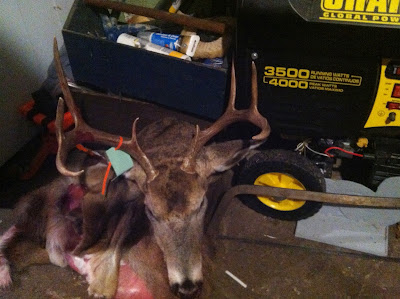 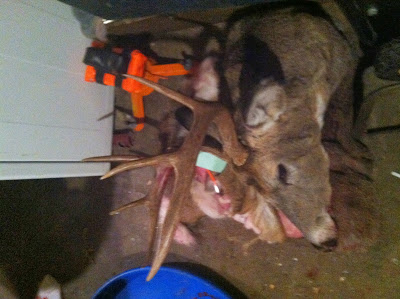