The fish held on the same shallow main lake cut fluke pattern today. We fished from 7am till around 1pm before packing up and heading back to Hinton. I ended up with 21 and Greg and Todd caught 24 today. I did pick up a couple around riprap on a squarebill today.  I talked to Jason who had just pulled back into town for the weekend as we were leaving to go home. I did find one pocked below the brick roundhouse that I caught 6 fish on 8 casts all over 2lbs off of a Strike King Caffiene Shad. It was a good day and has been a pretty productive fish. 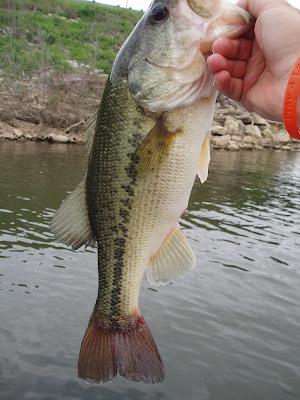 With Dad still under the weather I fished solo on main lake pockets from Bluestone to just below Clarksville. I figured out pretty early that heavy cloud matt had the fish up shollow on any kind of stickup or laydown bigger than pop can. If you twitched a fluke and then let if die they would really nail it. I ended up catching 37 bass, with 21 over 2lbs but he largest only being 2.8 lbs. Greg and Todd started off a little slower but went of to catch 29 fish as well. Todd lost one of the largest fish he's ever hooked on a crankbait. Greg also missed a really large bass  on a fluke on this day. A person could have beat your brains out trying to catch fish our of coverless creek arms but out of the main lake all the debris and trash made the bass some great cover to hold on. 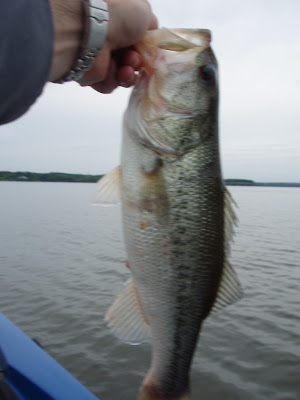 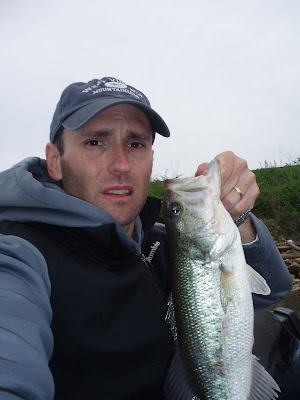 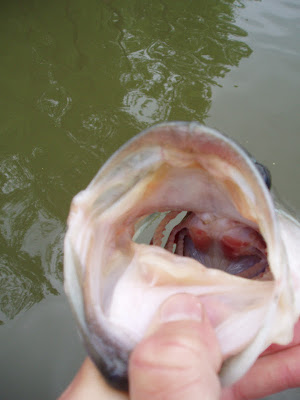 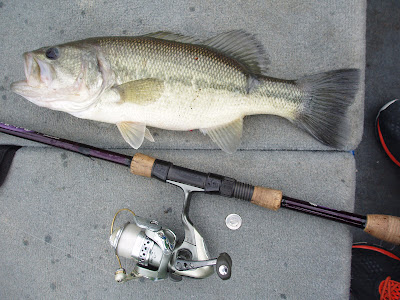 I fished solo out of my boat, since Dad wasn't feeling good, I started off along side of Greg and Todd on a day were we started off in short and t-shirts and ended up in sweatshirts with bibs trying to stay warm. We caught some good fish off the Clarksville riprap on cranks and spinners early. Greg caugtht on that weighed 4lbs and 11oz. off a spinnerbait early. 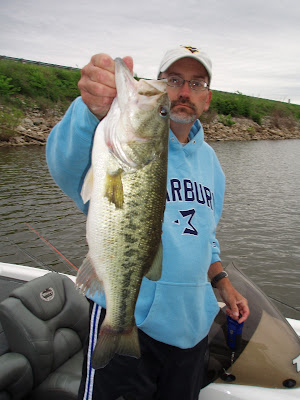 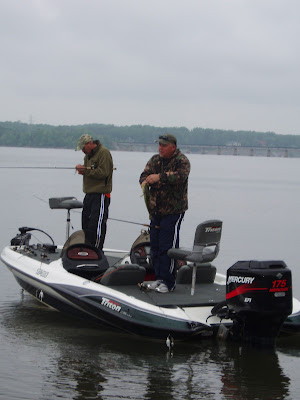 After catching around 6 or so off the wall  about I headed over the lake motel side of the lake in front of the Best Western Hotel and started cranking main lake riprap about 11am. I was running a LC CB flat 12 when I felt a big thump. I set the hook and felt a huge headshake. The wind was blowing in hard on that bank and it was shoving my boat all over the place as the fish slowly started to head out to deeper water. I pulled and couldn't move the fish. In the heavy chop I started to wonder if I really had a fish or maybe the wind was playing tricks on me. Or maybe I had hooked a big turtle. The fish layed down and I couldn't hardly get it off the bottom with my medium heavy baitcaster and 10lbs test. I would pull real hard and then it would wiggle around a little and then lay back down. After about 20  minutes of this I decided I was either going to break off, straighten a hook, or catch this fish, but I have had enough of the mexican stand off. I started pulling up and reeling down as fast as I could before the fatiued fish could get another run back to the bottom going. I reached down and got the net ready and when I got the fish up to the surface I slide the net under him. I had to put my pole down in order both hands on the net handle in order to get the fish in the boat. As soon as I got the mudcat in the boat I ran across the lake and got Todd to help me get the crankbait out of the bottom of it's belly, takes some pics and get a weight. Unfortunatly my scale only went to 30lbs and this fish maxed them out. It took Todd holding his mouth open and Greg reaching all the way down to his elbow with pliars to get my LC back. If they didn't cost 20 dollars a pop I would have let him have it. After all this we shoved him back in an he swam off to fight another day.  He would have made some good eating, He was by far the biggest fish I have ever caught on a pole in freshwater.


For the day I ended up catching 12 LMB's and the Mudcat. Greg and Todd got 17 with the largest being the fatty Greg caugtht that morning. The fish is getting better with cooler temps and most loved cloud cover. Man do I love cloud cover.
Posted by MAD APOTHECARY 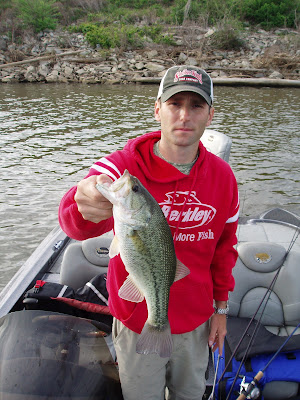 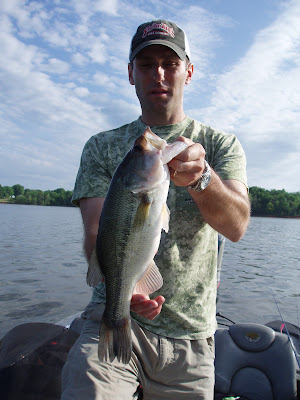 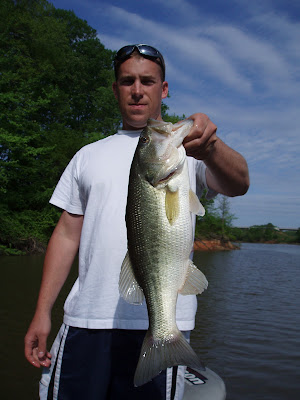 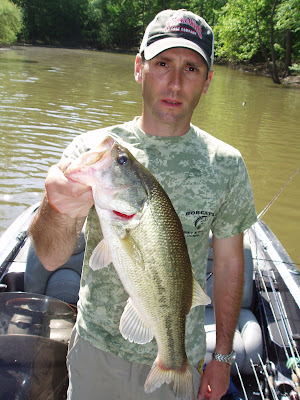 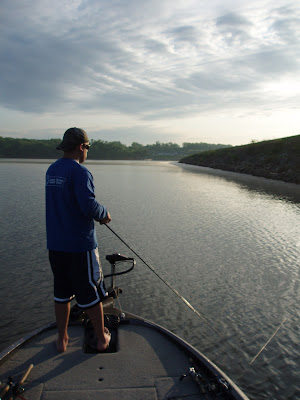 Jason and I fished only from 7 to noon today, but we made the time count. We caught 24 bass and a bonus mudcat and a 10lbs Drum. The last pic was my biggest off of a spinnerbait. I didn't get a chance to weigh it because I left my scales in my boat and Jason didn't have any on his. We caught our fish off of main lake structure that wasn't as affected by the lower water levels. Caught fish off of cranks, flukes and spinnerbaits.  Greg and Todd caught 17 today with some real nice 2 to 3 lbs fish in there. The Drum I caught came off a riprap bank on a crankbait. It was a tremendous fighter. I thought I had hooked a big stripper. It pulled drag and made big runs out to main channel.

That evening Todd and I went down the dock and he caught 6 channel cats off of chicken livers. I missed 4, I guess I used up my dock fishing luck the night before. 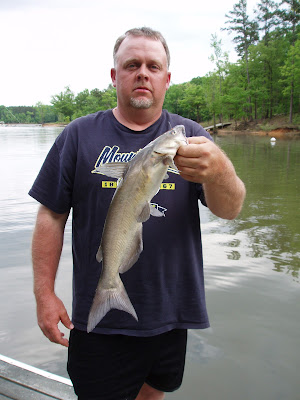 Jason and I fished all day in the high wind and heat. We fished form 7am till about 4pm. It was exausting. We started out at Grassy and ran to below Clarksville, then down to Ivy Hill, then to Powerline cove. We did a lot of running trying to find fish. I managed to catch 7, 5 bass, a 4lbs Drum, and a 6lbs. Striper that fought like he meant it. Jason got 3 LMB's. Greg and Todd managed only 3 total. It was a tough day but things are about to change with cooling weather coming in. The bass and striper I did mange in the adverse conditions came off of a LC square bill in splatterback on a wind blown bank off power line cove's main channel. The pics are being sent to me so I can post them, I forgot my camera again. I will update them once they come it.

After we got back that evening I went down to the dock below the house and caught a bluecat and a channel cat off of 4 left over vienna weenies that Jason and I had been hauling around all day. It was the first bluecat I have caught in years. 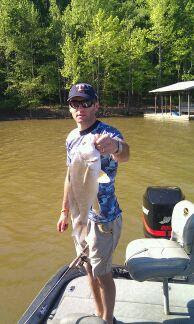 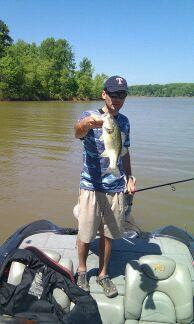 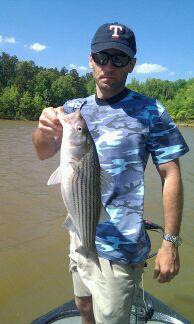 I arrived at Kerr for a week of fishing to find lower than normal water levels, 300 to 301, clear water, temps in the high 80's, and very high winds. Greg and Todd had fished the day before and had really struggled catching only 3 bass out of Bluestone Creek. All the normal spring structure that we fish in the spring in the creeks was out of the water but it wasn't as low as what you find in the fall where fish get on rocky wind blown outcroppings.  Dad and I launched out of Rudd's creek and tried everything. Flukes, spinnerbaits, shakey heads, bama rigs, you name it. I caught one fish off of a fluke and two more that night off a shakey head from the dock below the house. My camera wouldn't function today and I left Dad's back at the house, so no pics from today. Greg and Todd's found some fish on shakey heads out of a couple of pockets and managed to catch 14 total all day. It was a ruff day. Interestingly Dad and I did get checked by the VA game warden below pan handle branch. The officer was about my age and was real nice. He checked license, fire extinguisher, and life jackets. 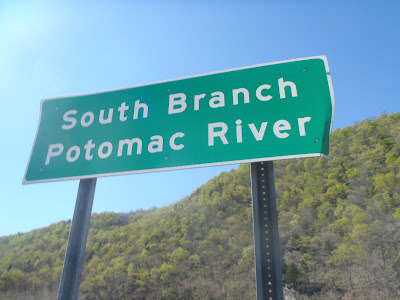 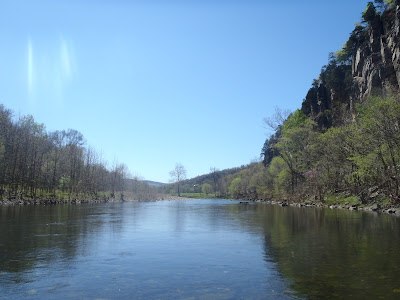 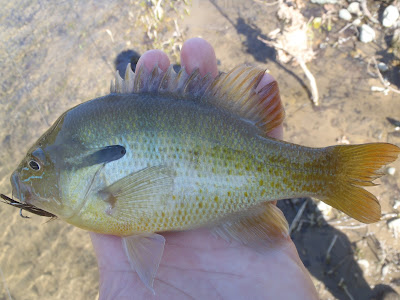 I fished two sections of the South Branch today. Fished from Welton park up and from Petersburg bridge up to Riverside Drive. I used brown in line elites in the gin clear water. The water for this time of year was very low. I ended up catching 18 total, mostly smallies with a bluegill, brookie, LMB, and a couple fallfish(Petersburg Stripers).  The wind howled all afternoon and the bluebirds skies were post cold front, so catching anything at all was nice. As always the scenery in this part of the state is second to none.
Posted by MAD APOTHECARY 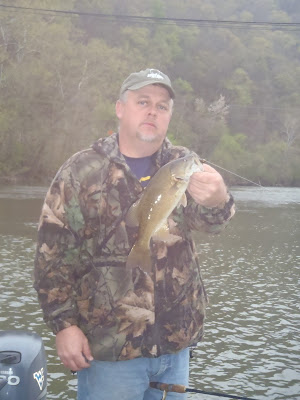 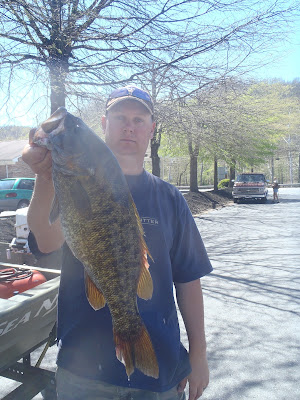 Todd and I put in on Avis beach in his jet boat at daybreak. We stared picking a few fish up when we    noticed the the water was dropping. Like from 7 gates down to 1. We had to pack up and get out. Because we were sure that it would kill the bite as well as limit the water we could could get around on. We went up and put in on the Greenbrier and fished for awhile but the wind picked up and our cloud cover blew out giving way to the dreaded bluebird skies. We caught a few, the fish didn't want to chase and the wind blew hard enought to kill a finesse bite. We ended up  catching 9 between both rivers. On our way back we ran into Robert, he had caught 3 fishing deep middle of river. But one was this huge 21 inch 4.75lbs smallie.
Posted by MAD APOTHECARY 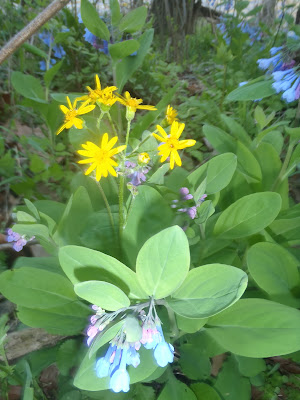 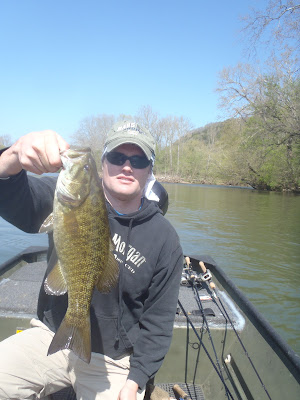 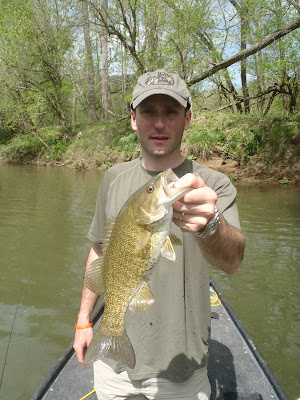 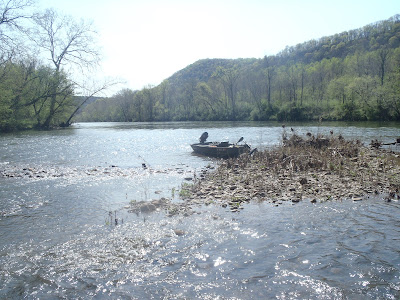 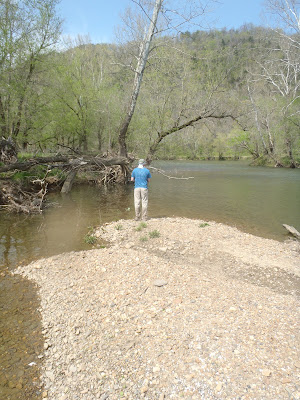 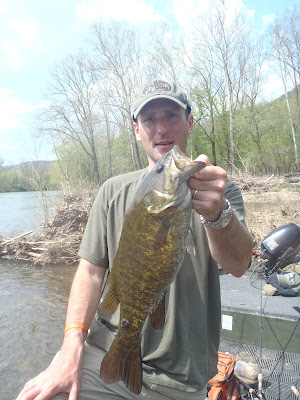 Fished Shanklin's from 8am till 4pm today. The weather was perfect. Warm, little cloud cover, no wind, high water stable water, no other fishermen around. The fish were spread out. Some shallow, some deep, some in cuts, some in current breaks, and some shollow. With the fish so spead out it you had to hunt and peck to find them. We caught some on g-tails and some on tubes. We caught 18 total with three fish over 2lbs. It was a fun day on the water even though we had to work to find the fish. We saw deer, turkey, and even a musky crushing the shallows.
Posted by MAD APOTHECARY