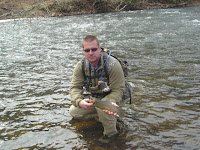 John and I headed down Canyon Rim trail to the Bluestone River around 9am on a cloudy and colder than normal morning. The temperature was in the upper 30's. We fished from 10 until around 12 only catching only 1 rainbow trout a peice. At noon we took a break and ate lunch. After lunch the sun started to poke out and the fish started hitting. Between 12:30 and 2:30 we caught 13 between the 2 of us. John ended up catching 8 rainbows and I caught 7 rainbows. We fished from ~one half mile below the lodge up to a deeper hole that had a creek coming out into it about 75 yards above the river trail merger. About 3pm we started our hour long hike out towards the Canyon Rim Center. We fished 10 combined hours and caught 15 total fish. 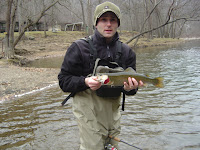 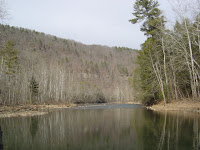 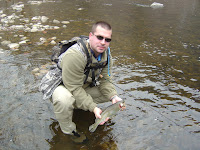 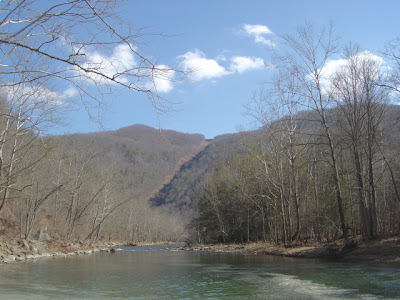 I got a call from Brad the night before about a Fish study that WVU had started on the Bluestone river. Specificly that they had stocked 1400lbs. or exactly 760 total fish, all rainbows. He was told this by Josh Bolar. Josh had told me that they were doing conditions study and that this may happen the year before, but I figured the water temps or pH hadn't panned out and that the whole plan had fell through. Jason Brown and I had planned on trying our hand at Crappie fishing on Bluestone lake but in light of this info we changed our plan.

The beauty of this stocking is that the tram doesn't run until early May or late April and the only way in and out of Bluestone gorge is to park at the tram and hike ~3.5 miles down cannon rim trail and then the river trail. It is an extremely steep incline. In the picture above you can see the tram center at the top, which is were we parked and started our descent to the river. The long and steep trek to the river assured that few if anybody besides a few park employees with keys to the gate were going to have been fishing down there.

The weather that day was around the 50 degree mark. It started off sunny and later clouds moved in. Going into the cannon that day I was really county on the info from Josh to be right or otherwise Jason was probably going to think I was a dumbass for dragging him that mountain for no good reason. The trout where stocked at the lodge and ~ 2 miles up stream to where the river trail met the river. I borrowed Dad's waders for Jason.

It took us about 45 minutes to hike down to the river and change into our waders. We then hiked to Mountain Creek lodge and started fishing our way back up stream towards the original stocking point. We saw no other fisherman, in fact the only other person we saw all day was a park maintenace worker. He seemed really suprised to see us and he also told us that they would be stock more trout later this spring around April. He also told us that they had radio tagged 20 of the 760 fish stocked last October and that as of January 17 of the 20 where still in the 2 mile stocked section.

When started fishing it was about 10:30. Within a few casts I caught a 2lb. rainbow and was quite relieved that the trip wasn't going to be a bust. I got Jason some Joe Fly Elite spinners and clued him into to slow rolling them and soon we where both catch fish left and right. Over the next 4 hours I ended up catching 18 fish and Jason caught 13. He said it was the biggest trout he had ever caught and the most trout he had ever caught. I cautht 4 fish that I estimated where in the upper 2 to low 3 lbs. range. The avg. weight of the rainbows stocked were 1.84 lbs. That is a lot bigger than most fish that the DNR stocks. We released all the fish we caught in an effort to support the project and because who wants to carry 57lbs of fish out that cannon.

When it was time to leave it took us right at an hour to hike out of the gorge. An hour of hiking straight up toward the cannon rim center. About half way to the top I got a blister on my foot from my boot that made my hike out miserable. But all in all it was a great fishing trip and some exceptional trout fishing. 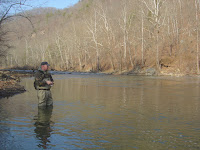 Dusty, Joe, Brad, and I headed back in Bluestone gorge . The weather was in the upper 40's to low 50's . The water was lower and clearer than the day before. We fished from 9:45 until 1:30. Dusty caught 7 and lost 2 more, I caught 7, Joe caught 5, and Brad caught 4. We caught 23 fish as a group in a little less than 4 hours, all rainbows. We released all the fish we caught. I caught 2 fish that had hooked jaws. Brad got there an hour or so later than we all did. It took 40 minutes to hike in and a little over and hour to hike out. It was a good day, exhausting but good. Hiking in and out 2 days in a row was preety tiring. It was a nice break from winters bordom. I don't expect the good fishing on the Bluestone to last very long after the tram opens. Right now it takes a lot of effort and a desent level of fitness to get out of that gorge by foot. But after the tram opens in late April or early May that will all change. But by that time there will be warmer waters and many other species of fish to chase after. This little WVU fish study has given us an early escape from spring fever.
Hours Fished = 3.5 Fish = 7 Hours Fished by Group = 13 Group Fish = 23 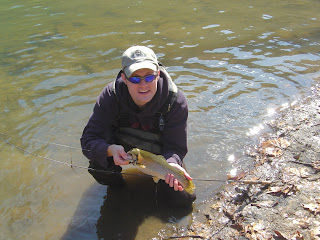 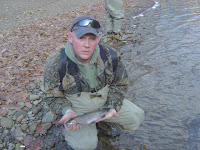 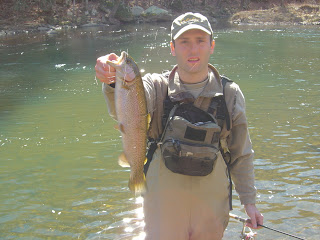 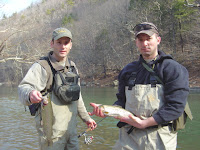