A Couple Hours on the Greenbrier

I went below the house for ~ an hour and a half or so. The water was low and clear and bites were had to come by. I cauth 3 small bass and lost 2 more. The fish in the river were in summer pattern and the afternoon on a hot day is not the time to fish.
Posted by MAD APOTHECARY 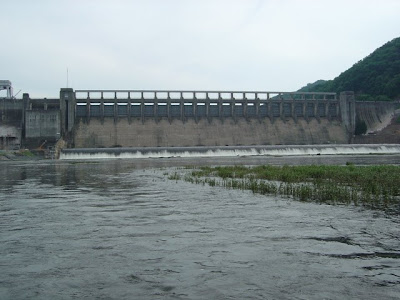 In a day of fishing that I would just as soon forget Brad and I went wading below the dam on a hot and crowded afternoon with the intentions of catching lots of little smallies. The river has been unfishable for 6 straight weeks, and druing the the best time of the year the river no less. Needles to say I was lookin forward to getting to fish the New river for the 1st time in along while. I started off throwing a small 1/4th oz. chatterbait. I had one bite and he got off. I am just about to write off chatterbaits. I like the idea of them and it can't be much different than swimming a jig, but I never get bit on them. Then I went to switch to a Pinn's minnow and dropped in the current while trying to tie it on. The current started to carry it away and I went chasing after it. While in pursuit I fell and went completely under giveing the plug ample time to escape. What a great way to start the afternoon. Meanwhile Brad is pulling in fish after fish after fish with his homemade in-line elite spinners. I put an elite on and started missing and loosing fish left and right. Brad and I would throw to the same spot and he would catch one and I would either miss or lose one. By now I am really starting to get that this is just not my day and maybe I should just cut my loses and go home. But instead I pressed on in a severe state of irritation. I switched over to the old faithful river plug the Rebel Crawfish. Finally I started landing a few smallies, nothing big but at least things were starting to look up, right? Wrong 10 minutes later while in the absolute middle of the river while fighting a smallmouth the bail on my spinning reel broke. On that note I said %$#*^&$ and went home not 2 hours after we had started. I caught 12 and Brad caugth at least 25 or better. In the words of Tom Petty,"Some days are diamonds and some days are rocks".
Posted by MAD APOTHECARY 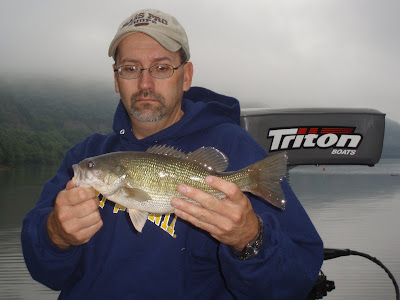 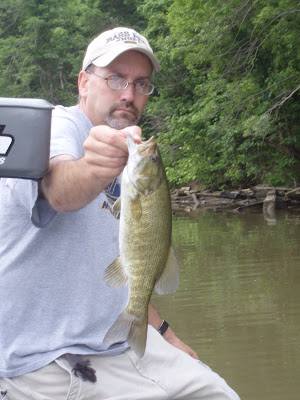 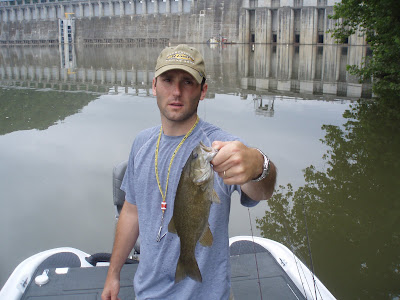 Antoher sloppy day on Bluestone lake with 70 degree water, heavy stain and getting muddier, with overcast skies. Greg caught 8 most of them on a buzzbait. I caught 6 on spinnerbait and shakey head worm. Fish are post spawn and starting to spread out and fall into the summer pattern. The grass is not up yet at Bertha campground. By the time we left the lake was nearly unfishable, especially up river. As usual the best water conditions were down by the dam.
Posted by MAD APOTHECARY 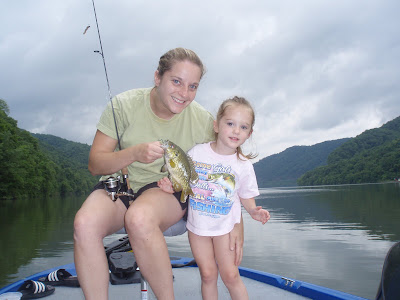 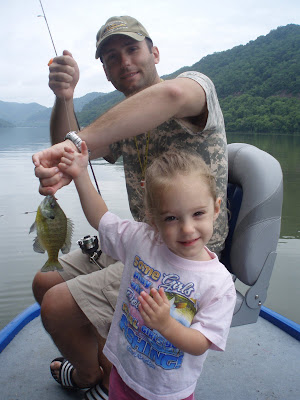 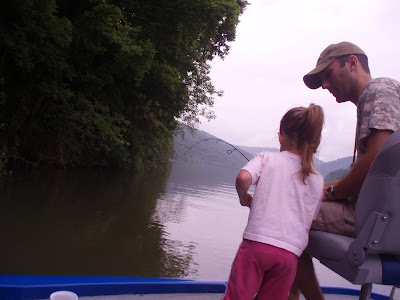 I headed up to Bluestone Lake @ 7am and bass fished with a shakey head worm until 10 am when Avery & Aleshia made come up to do some bluegill fishing. I caught 11 bass and 2 crappie on a shakey head worm. All avg. sized fish but I also missed atleast 6 other fish on the shakey head. Once Avery & Aleshia got there we started bluegill fishing with a worm and a bobber. I would cast the line and set the hook and Avery would reel it in. Avery caught 20 or so gills and a spotted bass. Aleshia also did some bluegill fishing she caught 25 bluegills, including some really nice sized ones. Everybody had fun, and Avery did great considerin she's only 2 and a half years old.
Posted by MAD APOTHECARY

I got a new St. Croix Avid ultralight and was dying to try it out, so Brad and I headed up to Bluestone Lake only to find mud and debris floating everywhere. It was bad enough that the only fishing you could do was with live bait for catfish or bluegills. We ran up the river only to find that the water coming down from Claytor was even worse. The only place we could even catch bluegills was right up beside the dam where some of the mud and trash had not yet filtered down to. Brad caught ~ 25 gills and I caught 20 all medium to small sized. We gave up well before dark after having started only at 6pm so that we would not have to got throught all the floating trash in the dark. As bad a shape as the lake was it still was better than the Bluestone River, Greenbrier, or the New. We have had 23 inches in the month of June so far it is making local fishing all but impossible.
Posted by MAD APOTHECARY 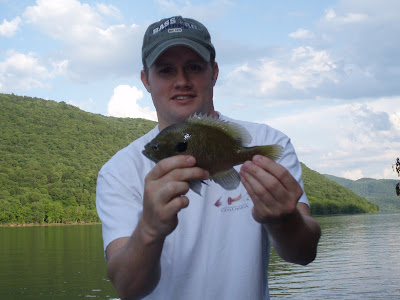 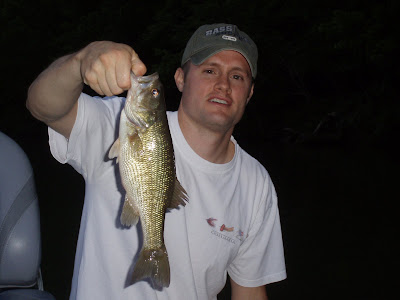 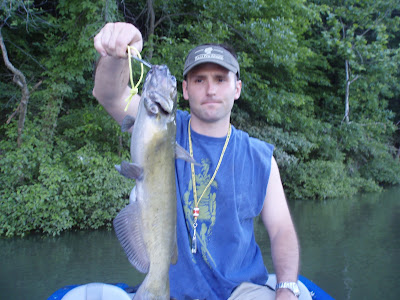 Brad & I did some mixed bag fishing on Bluestone lake on a scorcher of a day. We fished from 5pm till 8:30pm. We bluegill fished with nightcrawlers early and then bass fished the last hour or so. I caught the catfish on a nightcrawler with an ultralight and 4lbs. line. He broke the line right as Brad put the net on him. We caught many bluegills. I caught 32 total fish and 7 bass. Only 2 of the bass would have kept. Of the 2 that were better than 12inches one came off of a Senko and one came off of a Spinnerbait. Brad caught his bass off of a spinner he made himself. From what little I've seen it looks like bluegill fishing is going to be good this year like it was 2 years ago. There's something simply fun about catching lots of little fish on ultralight tackle, it's like being a kid again. I leave for the beach in a couple of days but when I get back I will get some time to do some more bluegill fishing.
Posted by MAD APOTHECARY