Brad and I hiked in and fished from 8:30 to 1:30. We landed 19 and lost about 6 more. We each caught a 3lbs fish and I lost 2 more that were over 3lbs. We also had several missed hits and short strikes. The weather was cold and getting colder per the usual. The water was 62 percentile on the USGS and falling. I caught 10 fish on the day which oddly made my 2011 fish count 1,111 for the year. 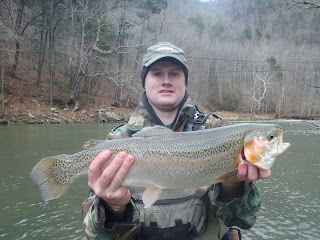 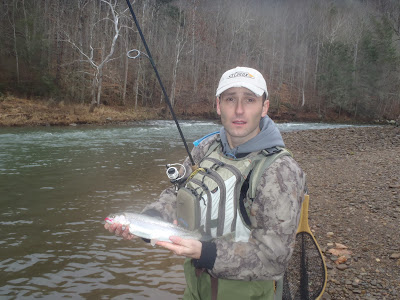 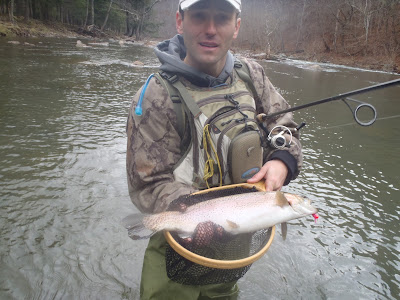 Brad and I attempted to trout fish today despite the river having a 70 percentile on the USGS. The only thing going for us was that despite the water being high it was falling. Long story short we fished as best we could and landed only two trout, one fish each. But it was the right two trout mine was 3lbs and Brad's came in on the digital scales at 4lbs. Unfortunately I dropped mine while we were trying to snap a picture. Trout are like trying to  hold a 3lbs. bar of wet soap. Through the clever use of a net we were able to get a picture of Brad's which was the bigger of the two anyway. 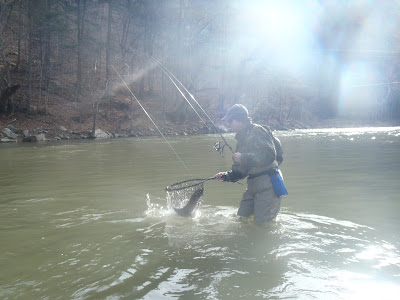 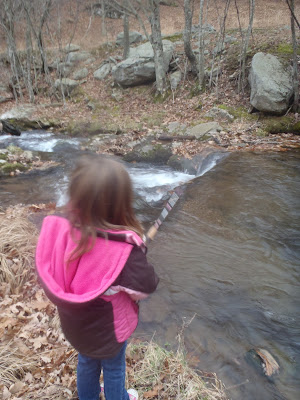 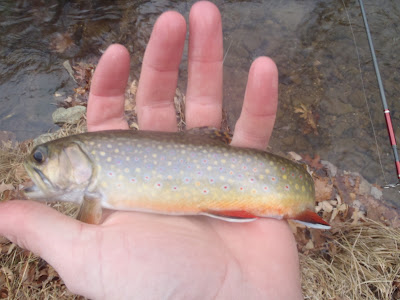 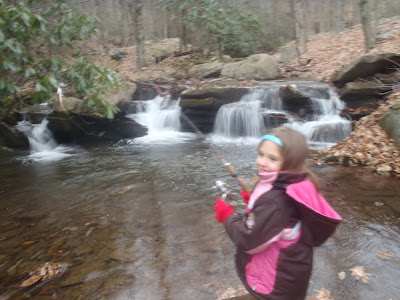 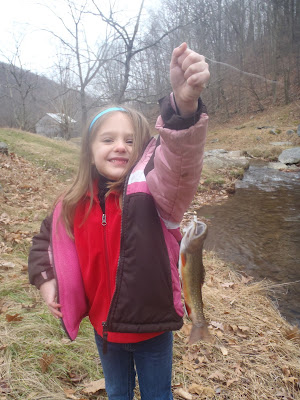 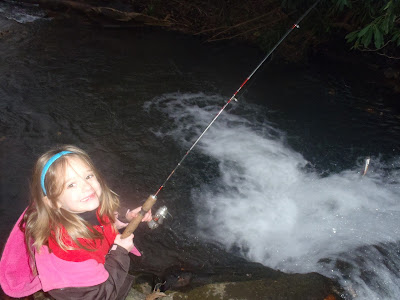 Avery & I fished the head waters of Lunice Creek on Aleshia's grandad's farm on Jordan Run. It was cold and our fishing was limited to an hour or so, but we managed to catch 10 and hook about that many more native brookies. Despite the cold Avery seemed to have fun catching some of WV's most beutiful fish.
Posted by MAD APOTHECARY

Danny Helms and I hunted the farm on a cold foggy morning. He hunted off the end and I went back into my  Highwall stand.  On my way in after daylight I could hear some turkeys on the Maddam's Creek side. As I was listening to them I could here somethng coming down the ridge towards me. It was moving cautiously and slowly. I stopped by a good tree to rest off of and decided to wait it out and see what I was dealing with. About 20 minutes later I saw a deer coming down the ridge line towards me about 130 yards away. I made it out to be a 4 point buck. I started to take a shot initll but decided to let it come closer. Then the fog thickened and the deer disappered for a short while. I next saw the deer getting ready to walk over the ridge towards the thicket at about 90 yards. I took my shot, heard the bullet hit, saw the buck hunker down, then run down the hill. I quickly headed down only to find no blood. I followed the deer's  tracks along the heavily frosted ground going  around the hill. As I tracked it I looked up only to see it run around the hill into a small thicket. On my way to the thicket I started to find a blood trail. At this point I should have backed off and gave the deer time like you do when bow hunting. Instead I made a stupid choice and pressed on into the thicket. I jumped the deer out of the thicket but it was so thick I couldn't even get my rifle shouldered. I quickly pressed on and saw the deer wobbling up the hill towards the next ridge line. I got the gun up, fired a second shot, saw the deer go down only to quickly get back up and run over the ridge line out of sight. Within 15 seconds of the deer leaving my sight I heard somebody else shot from Angel's high point stand. I went up there and talked to a guy named Keith who as hunting on Angel's. The deer I had shot twice ran by his stand and was shot a third time and killed. Oh well, he said he hadn't seen a buck all season and seemed really tickle with this buck and at least the deer didn't suffer. Besides I was kinda dreading the drag out of there. He had let deer cross the boundary before he shot it. I saw three more does that morning after everything settled out. Danny saw several deer ~ 9 but all does. It was a nice morning to be in the woods. In light of  a couple of my lasting shooting performance (1 for my last 3 on deer) I will be spending some time at the gun club this upcoming year working on my rifle skills.
Posted by MAD APOTHECARY