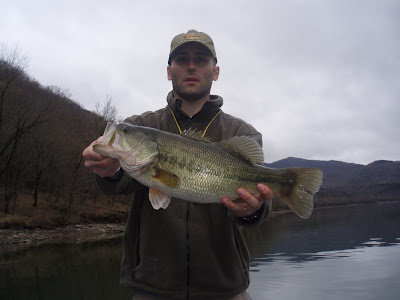 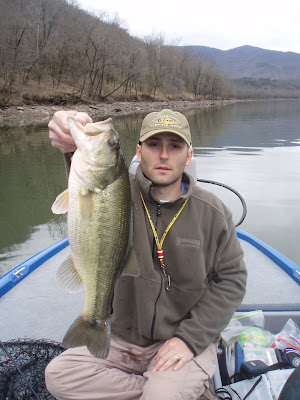 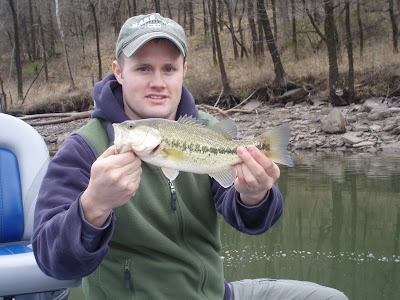 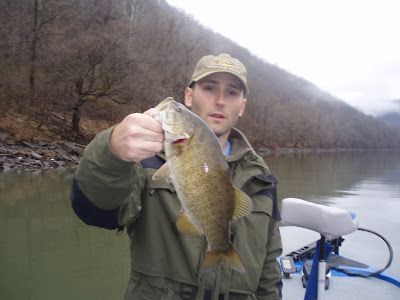 Brad & I started out bass fishing on Bluestone Lake on an overcast morning with no wind and water temps in the 47 to 49 degree range. The lake was still at winter pool and it had rained hard and heavy the day before so the water was coming up quite a bit. Place on the lake had some stain and others where still pretty clear. Several people were crappie fishing but I saw only one other boat bass fishing. I started off throwing a Lucky Craft Pointer below the fridge rock. I caught 2 largemouths, a smallmouth, and a spot on the first pass. All good fish 12 inches plus and the smallmouth was 15 inches long. On the second pass Brad put on a larger Pointer and we refished the same stretch. I caught 2 more good sized largemouth on the second pass. We then moved across and cranked the cliffs on the otherside. I caught one more largemouth right at the begining of the cliffs as you go up the river. We then refished the fridge rock stretch for a third time. Brad tried some yo-zuri minnows and 2 other pointers but for whatever reason they only wanted the size and color I had, so for an experiment we traded rods and he tried fishing the magic pointer. Sure enough on that pass he caught 2 nice largemouths and I caught none. I tried a senko and a fluke some but it's still to early for those just yet. We then tried fishing the side across from us up toward Bertha campground. Within the first few minutes I got a big bite and started yelling for Brad to "get the net". After a great fight I had a 20 inch 4.5lbs Largemouth. I was starting to value that little pointer, which was actually my Dad's, a lot more with every cast. We took some pics and measurements and then set him free to fight again another day. We caught several more 12 to 14 inches fish up that side. Brad even caught 2 on a black and blue moderately sized jig and pig following up the pointer. We ended up catching 12 and 4 fish each in 5 hours of fishing. By 1pm the wind picked up, rain started, and the bite completely stopped.
Posted by MAD APOTHECARY 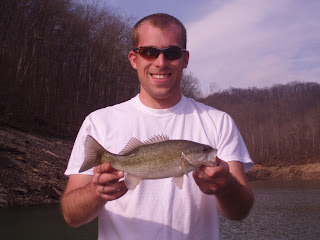 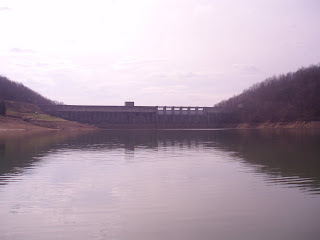 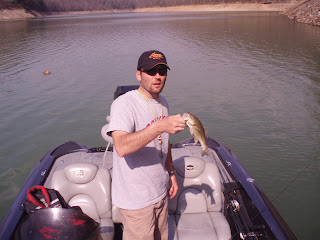 I met up with Jason Brown in Beckley and we headed up to prefish Sutton Lake. We took Jason's boat he had a Bass Tournament on the following Saturday that he needed to practice for. When we got there the lake had some stain at the launch ramp, the water was 51 degrees and at a level less that normal winter pool. Much of the lake was too shallow to access. We caught a spot and a largemouth right off on bandit crankbaits around wood. Then we fished with everything we had for 4 hours without a bite. We tried spinnerbaits, jigs, jerkbiats, flukes, dropshot worms, around rock, wood, ledges, shallow points, brige pillars and every where else in the lake that was wet and we got nothing. The upper end of the lake was stained and 51 to 57 degrees and the lower end of the lake was clear and 46 to 47 degrees. In the lower end of the lake both Holly River and The Elk river, famously cold trout waters come together. The fish activity in the lower end of the lake was off the charts higher than the upper end due to the warmer water. Finally about 2pm we ran back to the lower and warmer end of the lake and Jason put on a Lucky Craft Pointer 65 in Tennessee Shad color and preceded caught 2 spots around the mouth of a cove in 3 casts. I immediately followed suit and swithced to a Lucky Craft 65 pointer in a Aurora shad and caught 2 more as well. After that we got on a pattern and went on to catch 14 more fish all between 10 and 12 inches. One of Jason's friends had caught a 6lbs 11oz. largemouth on Sutton a week or so prior, so the runts we were catching weren't what we had in mind. Although catching 8 and 6 smaller fish each isn't too bad for the month of March and it sure beats catching nothing which I have done on numerous occasions before. Both Jason and I lost 2 or so more fish we had hooked although nothing big. 14 fish in about 7 and 1/2 hours of fishing was the end result.
Posted by MAD APOTHECARY 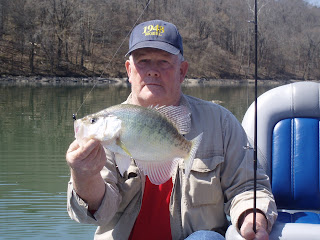 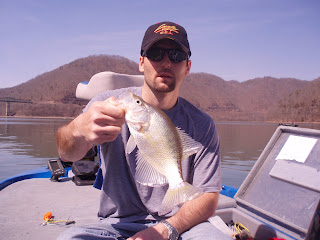 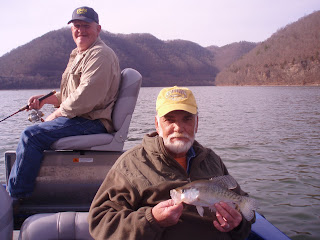 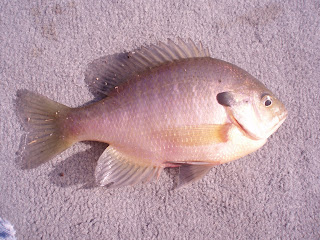 The three of us along with 5 dozen minnows headed out on the Bluestone above the intake marker for some crappie fishing. The water had warmed up to 53 degrees the sun was strong and the wind was only a breeze. We fell slowly into the same pattern as the last week. Yum beaver tails tipped with a minnow fished on the bottom in 16 to 20 feet of water. We started off slow but things picked up as the day went along. I ended up catching 10 crappie and a big blue gill, Dad caught 5 crappie, and Roger caught 21 crappie and 2 redeyes. You can tell from those numbers who the experienced crappie angler is! We had a good time even though a lot of our fish were some what smaller than our last trip and the bites we did get weren't as hard, but still a good outing for March. I talked to some other anglers who had caught a couple of bass and have heard some tails of some bigger fish being caught at other lakes in our area. With water temps in the 50 to 54 degree range it won't be a lot longer till bass of all types are thinking about moving up shallow and feeding before spawn.

What worked:-Yum Beaver tails tipped wtih a minnow fished on the bottom
- 50 degree water with 18 to 22 feet of depth
- A little breeze to help slow troll us thru the strike zone
- Deadstick or very little imparted action on the lure.
Posted by MAD APOTHECARY

Not So Crappie Day- March 18th

Dad & I started out fishing for Crappies on Bluestone Lake with black and blue beaver tails tipped with minnows rigged on a dropshot double rig. It was cold and extremely foggy early and the fishing was really slow. We moved the boat a couple three times and Dad caught a really nice one (~15 inches)in front of the cliffs on the left only after the sun started to cut through the fog. We then went down the lake and picked up a couple three more smaller crappies but they were all on the bottom and spread out. The wind picked up for a while and we headed down to the dam and fished some deeper water with little luck. We picked up Roger about 2pm and headed back up the lake after catching a couple in front of the pit bank. When we started fishing the water temp was ~47 degrees, but once the sun warmed the surface temp to 50 degrees it was like you flipped a switch and the crappie bite was really on. We started catching fish very quickly and all the boats around us were doing the same. You would catch one after another. Roger caught 3 on 3 casts in about 30 seconds. I caught about a 16 inch channel cat on my drop shot double rig with beaver tails tipped with minnows. Jason Carr was across from us and he was catching a fish every other minute. Dad caught a blue gill, several smaller crappies, and a bigger crappie that I measured to be 16 inches long and 2+ lbs. Roger also caught a redeye that looked solid white. All the crappie we caught were white crappies that day. We ended up boating ~ 37 fish of 4 different species in 7 hours and 53 minutes of fishing. We had a good time, enjoyed a rare warm March day, and all caught some good fish. I learned a lot on this trip about how the Crappie game is played. My camera battery died. I took some pics with my cell phone but am still trying to figure out how to upload them to blogspot.com. 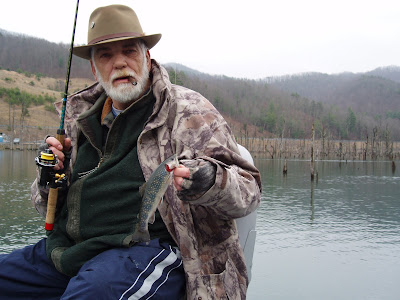 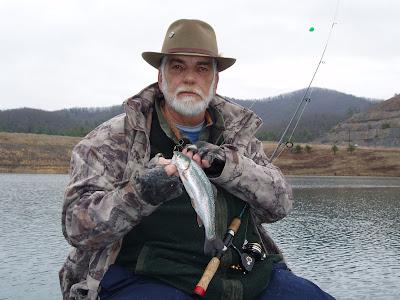 Dad and I headed over went trout fishing at lake Tuckahoe with the bass boat. They had stocked 2 days earlier and there were a lot of other fishermen on the water including 7 other boats. We saw lots of trout but they weren't very co-operative. We tried spinners, jigs, spoons, power bait, Yo-Zuri Pinn minnows and salmon eggs. I hooked and lost 3 differnt trout, and Dad caught a brook and a rainbow while also losing another rainbow on salmon eggs rigged with split shot and a bobber. There where a lot of gold trout in the lake and they would follow a bait it but they would not hit anything. We saw a lot of trout being caught but no golds. One guy did have one on a stringer but that's about it. The water was between 44 and 47 degrees. We managed to dodge the rain and the wind and even though I didn't catch any fish I did have a good time.
Posted by MAD APOTHECARY

I walked below the house and tried slowly fishing a black G-tail on a sunny afternoon. I had one little bass chase it back to the bank but other than that I had no bites. The river was especially clear for the Greenbrier and falling which didn't help. The water is still very cold. Waiting on fish to bite in the spring is like waiting for flowers to pop up. A very few start early and it seems like take forever but one day they are everywhere in full bloom.
Posted by MAD APOTHECARY

Early Crappie Fishing On The Bluestone 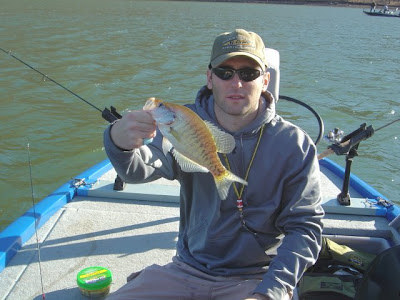 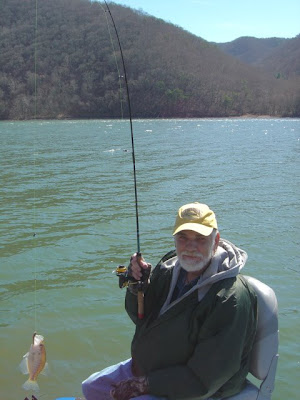 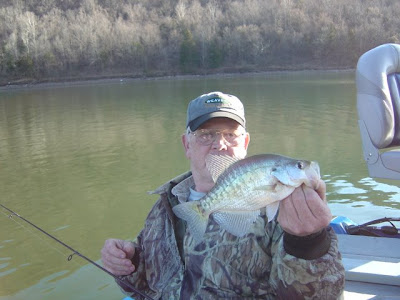 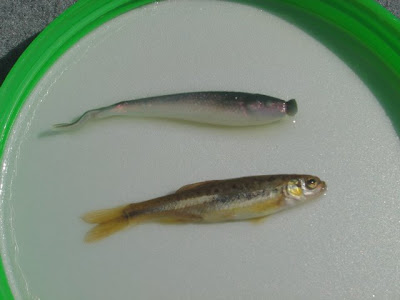 Roger,Dad, and I started out on around 9am on Bluestone Lake. We crappie fished with minnows and jigs tipped with minnows. Roger caught 6, I caught 2 crappie and a bluegill, and Dad caught 2 crappies. Had the wind not gotten tough I believe we would have caught a lot more fish. We saw a guy catch a small musky on a crankbait while crappie fishing in a boat across from us. We fished three differnt areas and caught fish on the bottom in all three places. The water temps were around 50 to 52 degrees. The fish seemed to be spread out for the most part right now. The last picture is a real minnow on the bottom contrast with a Berkley Gulp Alive Minnow, it's not live bait but it's close.
Posted by MAD APOTHECARY 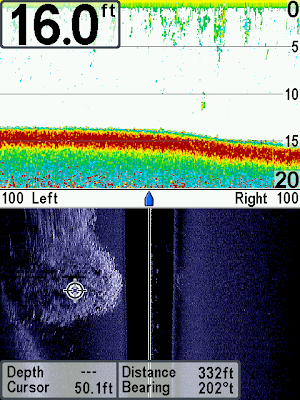 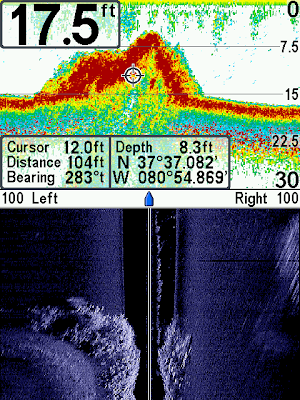 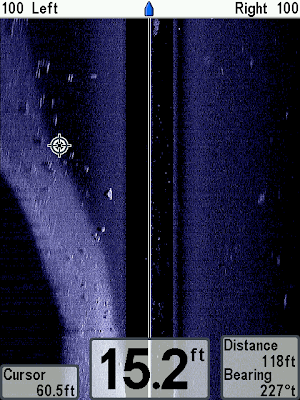 -Rocks on the Pit Bank Shelf 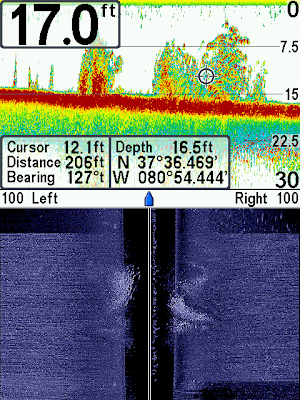 
I headed up to Bluestone lake with Brian to try and start learning how to use the HumminBird Side Imaging that we had installed over the winter. The lake was still at winter pool and launching a boat was really hard. There were 8 or so boats crappie fishing. I saw Elmer Wykle up there and he said they had caught some crappies on minnows. I am still in the learning curve with this sonar but it's definetly a solid upgrade. Having GPS maps and being able to mark waypoints as well as having a color depth finder is really nice. The side imaging definetly works it's just leaning to read and optomize the opportunities it prestents. I found BillBob' hump, some scattered rock piles off the pit bank, brush piles with crappies, and some isolated rock structure.
Posted by MAD APOTHECARY